Father Gary serves St. Demetrios Greek Orthodox Church in Camarillo, California. Camarillo is in Ventura County, which is just outside of Los Angeles. He has been married to Christina since July 6, 1997. After their honeymoon they moved to Brookline, MA for Gary to pursue his Masters of Divinity. There Christie gave birth to the couple’s two boys Haralambos (Feb. 2000) and Iakovos (March 2001). Fr. Gary Kyriacou was ordained to the Deaconate on May 27, 2001 and then to the Priesthood on September 9, 2001.

Fr. Gary was the assistant to Fr. Tom Paris at the Ascension Cathedral in Oakland, Ca from June 2001- July 2004. On August 1, 2004 he was assigned to serve the faithful of St. Demetrios Greek Orthodox Church in Camarillo, Ca. In 2004 the devoted community purchased 4.1 acres in the center of Camarillo and began to raise money to build a new structure. In 2013 the Ground-Breaking Ceremony took place for the St. Demetrios Agape Building. The Agape Building, a two story edifice with a chapel, reception hall, conference room, offices and classrooms was completed in 2015. St. Demetrios celebrated the Thyranoixia (Door Opening Ceremony) on May 31, 2015 and the new building was permanently occupied in July 2015.

Fr. Gary also serves as the Chairman of the Board of Trustees for the Metropolis of San Francisco Greek Orthodox Greek Dance and Choral Festival. Here he enjoys gathering the Youth of the Metropolis and sharing with the them importance of our Faith and Culture.

In 2008 Pres. Christina gave birth to their little girl, Eleni Kay Kyriacou. The family of five loves living in Ventura County. They like going to the beach, Dodger games, and the movies. They enjoy In-n-Out Cheeseburgers and playing Apples to Apples.

Fr. Gary studied Film Production at California State University, Northridge with an emphasis in Screenwriting. Prior to answering his calling to ministry he wanted to be a film producer and screenwriter. He worked on a few films and television shows before earning his Masters of Divinity in May of 2001.

Dearly Beloved in the Lord,

It is with deep joy that I write to you. Though we continue our isolation and separateness in the midst of the pandemic, I rejoice that we have such ample opportunity to call out to Christ for His Mercy and Love: "Through the cross, joy has come to the whole world" (Sunday Matins/Orthros). But how can anyone speak this way without sounding callous or inconsiderate? "What?!" How dare he say to rejoice! I've been home for nearly a year; lonely, depressed, and mentally stagnating. How can I possibly rejoice?"

Sunday of the Prodigal Son

Drop us your email address to keep up to date with our events, monthly newsletter the "Myrrh-Bearer" and much more. Subscribe

Hymn of Kassiani by Nick 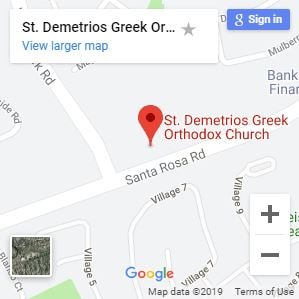 The Gospel of John 8:12-20 Again Jesus spoke to them, saying, "I am the light of the world; he who follows me will not walk in darkness, but will have the light of life."

Parish News.... Drop us your email address to keep up to date with all our events and latest news. You can subscribe to multiple lists like our Online Chapel with the Readings for the Day or our monthly newsletter the "Myrrh-Bearer" and many more.